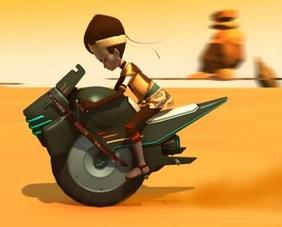 Barring the odd three-wheeler, most wheeled vehicles throughout history have sported an even number of wheels, usually four. But that doesn't seem streamlined enough for certain aesthetics. This trope describes creatures (usually robots or cyborgs) or vehicles that move by balancing on a single wheel, or occasionally a spherical ball.

Try not to think too hard about how it stays upright.

Truth in Television insofar as the unicycle has been in use since at least the late 19th century, when riders of penny-farthings

found that they could lean forward, raising the much smaller rear wheel off the ground, and still maintain balance. Eventually the rear wheel was left off of the design altogether, resulting in the modern unicycle. However, it has largely been regarded as a gimmick since the development of the safety bicycle

(what most people think of simply as a "bicycle").

Monowheel Mayhem is a subtrope in which a vehicle is a single wheel. Non-robotic creatures to which this trope applies are examples of Bizarre Alien Locomotion.