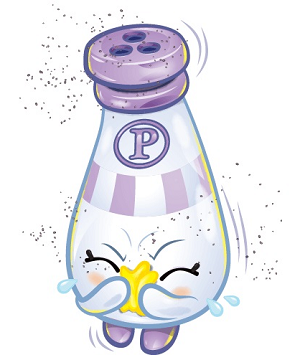 Gesundheit.
"I want to cover every inch of your gorgeous body with pepper, and then sneeze all over you!"
— General Melchett, Blackadder
Advertisement:

When a character's nose is doused with black pepper, it causes the victim to explode in an exaggeratedly violent sneeze. The origin is uncertain, and although consuming amounts of pepper on food can make eyes water and cause sneezing, it probably has more to do with how recognizable a prop pepper shakers are.

There is some Truth in Television, as you actually can sneeze from inhaling pepper and other fine particulates, although if you directly inhale pepper you'd feel more like coughing than sneezing.

Often used in conjunction with the Sneeze of Doom. Sometimes Anti-Sneeze Finger is used to attempt to stop this sneeze.

The Beatles find themselves in Pepperland

The Beatles find themselves in Pepperland