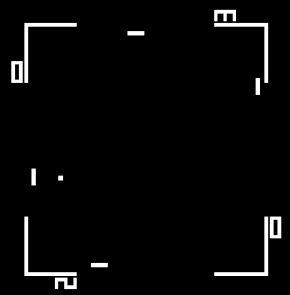 It was as simple as that.
Quadrapong was a four-player version of Pong, released by Atari in 1974. It was the first arcade game with a cocktail cabinet; players stood around it, each defending one side of the screen. Each player started with four points; if the ball went through their goal they lost a point. When they were "out", their paddle and goal would disappear and be replaced by a solid wall.
Advertisement:

Originally released as Elimination! by the secretly Atari-owned Kee Games.