Only Useful as Toilet Paper 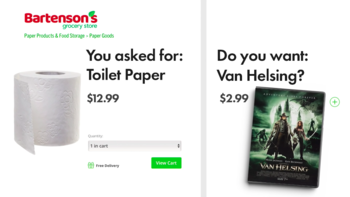 George: You can't deny that this fine newspaper is good for the morale of the men!
Edmund: Certainly not. I just think that more could be achieved by giving them some real toilet-paper.
— Blackadder Goes Forth
Advertisement:

This trope is when literary writing is seen as such poor quality that it's only fit to be used as toilet paper or campfire tinder, (or similar undignified uses).

Sometimes it really is that bad, but a common variation is an illiterate or less cultured person using a book for toilet paper or kindling because he genuinely can't see any other use for it. In this version, don't be surprised if the book was a gift from an intellectual character.

This is often a comedy trope, but not always. Saying another person treats a given text like toilet paper can be serious, depending on how serious the text in question is. A politician who says a rival "may as well be wiping his rear with the Constitution" is asking for a fight.

If the text in question is real, there's often an element of Take That! present.

Before the availability of cheap purpose-made toilet paper, people commonly used old paper for wiping purposes. The rural outhouse with last year's mail-order catalog hanging next to the seat is Truth in Television, but not this trope because the catalog had value, it's just on its final cycle of usefulness.