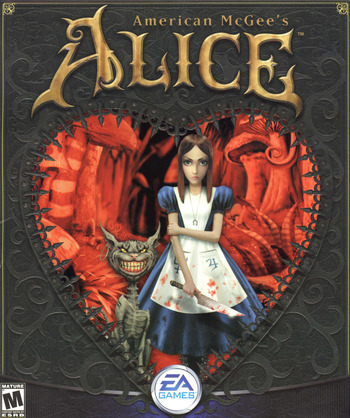 Killing makes her more sane.
Here's a riddle: When is a croquet mallet like a billy club? I'll tell you: Whenever you want it to be.
— The Cheshire Cat
Advertisement:

One of the darkest video games ever released, American McGee's Alice stars the titular character of the Alice's Adventures in Wonderland series. Released in late 2000 by Electronic Arts, and helmed by id Software alumnus American McGee (obviously), a former level designer for the Doom and Quake franchises, in his first role as project lead.

Alice Liddell's family has died in a fire of which she is the only survivor. The trauma leaves her mostly catatonic and suicidal, and she is institutionalized in Rutledge Asylum. Years later, her White Rabbit plush toy apparently comes to life and summons Alice to aid a radically altered Wonderland, now under the despotic rule of the Queen of Hearts. Alice must fight her way through the twisted dream world in an attempt to destroy the Queen and restore Wonderland to its former glory, and thus heal her mind. Along the way, she must destroy the Queen's minions, many of which are her former friends and companions. Her guide and primary ally is a twisted, emaciated Cheshire Cat, who can be summoned by the player for hints on how to go or just the occasional cryptic quote.

The game itself is an early action adventure, with Alice using a variety of deadly toys to kill the inhabitants trying to destroy her and solving a number of puzzles along the way. The soundtrack is particularly notable, created by Nine Inch Nails member Chris Vrenna with exclusively Victorian instruments and toys. The trailer for the first game can be viewed here

In February 2009, roughly eight or so years after the game was released, EA announced that American McGee got the band back together, so to speak, and the sequel, entitled Alice: Madness Returns was released on June 14, 2011. In May 2019, Alice: Asylum

was announced, reportedly dealing with Alice's early days in the asylum.

A TV series adaptation of the game was greenlit in early 2022.