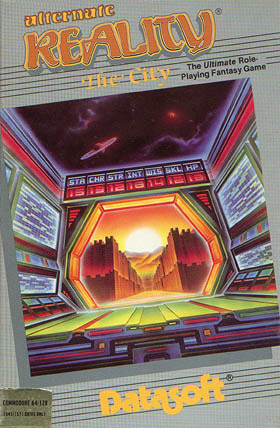 Return to Earth — or seek revenge on your abductors.
Advertisement:

(Not to be confused with Alternate Universe, Alternate History, or Alternate Reality Game)

Created by Philip Price, the Alternate Reality series of games started in the 1980s. The original games were designed for the Atari 8-Bit Computers. The first in the series, Alternate Reality: The City, was ported to several other systems. Extremely ambitious for its time, it supported 64 colors (Although only 4 on each line), a ray casting engine, and the ability to move between different installments in the series. Unfortunately the developers were only able to make the first 2 of the planned 7 games, before the company went defunct.

The character is abducted by aliens, and walks through a gate with many numbers (which is to say, game statistics), into a fantasy world. The world was a first person RPG a bit like Wizardry without a party, where the player character wanders around killing monsters.

Alternate Reality: The City had several places where the player was told to put in an expansion disk; unfortunately, nothing was ever made except for the second part (Alternate Reality: The Dungeon). Unlike the City, the Dungeon had quests and goals for the player (The City was literally just wandering and mapping). The trip from the City to the Dungeon was one way, contrary to the original plans.

Plans were to reveal the game world to be a virtual reality and to have multiple endings, some where the character continues on and some where he returns home.

Philip Price intended to create a MMORPG called Alternate Reality Online in the 90s, but this never got off the ground.