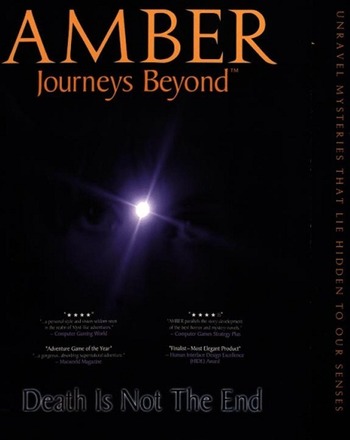 Also known as Amber: Journeys Beyond Death, this is a 1996 First-Person pre-rendered adventure game. The one and only game developed by Hue Forest Entertainment, essentially two people, Frank and Susan Wimmer. Similar in background and story to Dark Fall, this could essentially be classified as a Ghost-Hunting Adventure game.

One night in the mountains of North Carolina, you, a Featureless Protagonist are called upon by a friend named Joe, to meet paranormal scientist Dr. Roxanne ("Roxy") Westbridge, and assist her in her investigation of what happened to the various ghosts haunting the house she's stationed at. Unfortunately, on your way there, your car just happens to bump into a ghost on the road, making you crash into the nearby lake. By the time you recover and reach the house, you find her out cold in the garage. From there on, it's up to you to uncover what she was up to, and finish her work, if you can.

Amber: Journeys Beyond provides examples of: