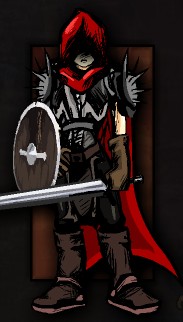 Amea (the title character) is a little girl who lives with her worm-monster friend Argos and two boys named Valde and Mish in the midst of a pristine, natural, and tranquil if exotic forest. Suddenly, as she explores her forest home, she runs into the gruesome sight of mutilated corpses overlooked by a very tall, dark figure speaking her name. Amea wakes from this vision in a mysterious house as a grown woman who remembers nothing about herself other than what she has just seen.
Advertisement:

In this house, she meets a man named Garrik who is suffering from the same amnesiac condition and who apprises her of what little he knows of the mysterious and deadly town they're currently in. Garrik goes out to explore rather abruptly; almost as soon as he is gone, a zombie starts attacking Amea inside the house. Grabbing a nearby sword and dispatching the creature, Amea goes out to search for answers to her forgotten past and the situation she now finds herself in.

Amea is an Action-Adventure flash game made by Godlimations with horror elements. The game can be found here