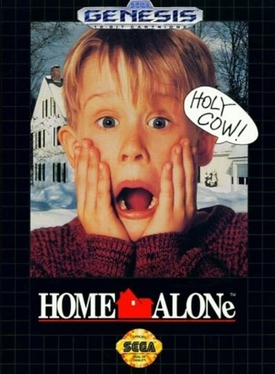 A Licensed Game based on the movie, Home Alone, released in 1992 by Sega for the Sega Genesis and Game Gear.

Based on the movie, Kevin McAllister has been left home alone, and he has to defend the neighborhood from Harry and Marv, A.K.A. the Wet Bandits. He travels from house to house on a motorized sled, and if he beats the Wet Bandits to one of the houses, he can set traps. He can also assemble weapons by collecting items in the houses and in the snowmen he knocks down. The goal of the game is to save as many of the houses from being looted and flooded by the Wet Bandits as Kevin can. Kevin doesn't have any lives, but the game is over if all five houses get flooded. The Wet Bandits have a Pain meter, and if it fills up all the way, they will leave the house and come back later.

A sequel, Home Alone 2: Lost in New York, based on the titular second film in the series, followed in 1993.