Literature / The Girl Who Never Made Mistakes 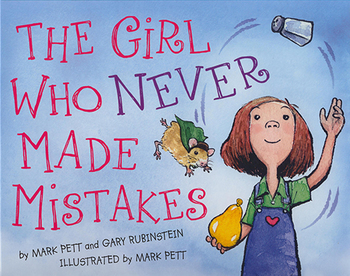 The Girl Who Never Made Mistakes is a children's book by two men named Gary Rubinstein and Mark Pett.

It is about a girl named Beatrice Bottomwell, who has become famous in her town as the Girl Who Never Makes Mistakes because she has never in her life made a mistake.

However, when she trips and almost breaks some eggs at cooking class, she doesn't count that as a mistake because the eggs didn't break, but it's close enough to a mistake that she worries that she will make a proper mistake on her talent night.

And sure enough she does: she accidentally uses pepper instead of salt in her juggling act, which makes her hamster sneeze and pop a water balloon, which lands on her. Afterwards, she's happy but nobody's impressed by her anymore.

The Girl Who Never Made Mistakes provides examples of: