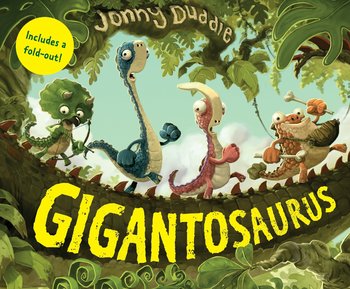 With teeth as long as you are tall, he'd soon make a snack of one so small.

Beware, my child,
of the Gigantosaurus,
so fierce and wild!
His feet go Stomp!
His jaws go Crunch!
In the blink of an eye,
you'd be his Lunch!

Gigantosaurus is a piece of Children's Literature by Jonny Duddle. It's about four baby dinosaur friends trying to play while at the same time avoid the dangerous "Gigantosaurus" as one of the friends Cries Wolf. It was first published in 2014. It was made into a Disney Junior series, which came out January 18, 2019.

"The jaws went Crunch! And the Gigantosaurus had his lunch!"