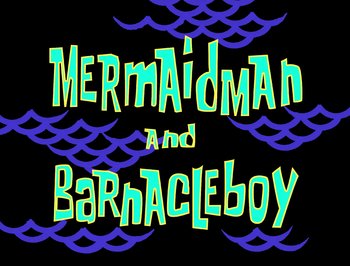 SpongeBob and Patrick meet their heroes from their favorite TV show, but they are disappointed to find out that they are retired. This prompts the two to try and get them out of retirement and fight crime again.

The episode begins with another exciting episode of Mermaid Man and Barnacle Boy handily beating yet another villain with their signature “Raging Whirlpool”. SpongeBob and Patrick, dressed as their heroes, cheer and proceed to play pretend that they’re the real heroes. Using a pair of donuts as rings, they unite and go outside to play with Squidward. But when Squidward as “Reflecto” gets fed up at their playing getting in the way of his tan, he tells them to go to the local retirement home to meet the real ones and get out of his hair. Our dimwitted duo travel to Shady Shoals Retirement Home and meet their heroes, now two old men who just want their TV fixed. Unswayed by Banacle Boy and the warden kicking them out and Mermaid Man being sent into panic attacks at the word “evil”, they try their best to remind them of their heroing days, up to and including faking a purse snatching and painting the Invisible Boatmobile (“It’s supposed to be invisible!”). The later turns out to be the last straw as the heroes use their powers to have their fellow elderly form an angry mob and toss the duo out. This in fact makes them feel young and start heroing again with "The New Adventures of Mermaid Man and Barnacle Boy". The episode ends with Patrick congratulating SpongeBob on a job well done, to which SpongeBob thumbs up and winks to the camera. The End. 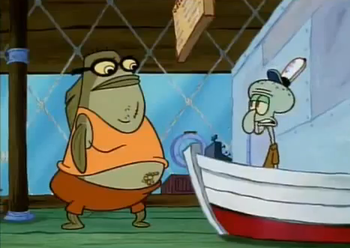 When SpongeBob believes that he forgot the pickles on a Krabby Patty, his life is turned upside down.

It’s a busy day at the Krusty Krab but SpongeBob handles every order that he comes across and leaves every customer happy. That is until a fish, half as wide as he is tall, walks up to order. He orders, in his words, “a Double Triple Bossy Deluxe on a raft, four by four, animal-style, extra shingles with a shimmy and a squeeze, light axle grease, make it cry, burn it, and let it swim”, to which Squidward snarks. It turns out that the customer is none other than Bubble Bass, the most picky patron to ever set foot in the Krusty Krab. SpongeBob is assured that his meal is exactly as he ordered… until Bubble Bass reveals he forgot the pickles! SpongeBob tears the patty apart, trying to find such a simple mistake while Mr. Krabs is forced to give Bubble Bass is money back. With his confidence shattered SpongeBob is sent in a tizzy, unable to make a Krabby Patty and is sent home. Mr. Krabs is soon forced to get SpongeBob back as every patty, fry, and yes even the shakes are burn to a blackened crisp and the restaurant is losing money and customers fast. He finds SpongeBob and his house mixed up and in disarray and decides that he will stick with the little yellow guy until he remembers how to make it, even if it takes days. SpongeBob eventually gives up in frustration… until he makes it perfectly. Mr. Krabs says it’s time and the two return triumphantly to the Krusty Krab. Word spreads fast and Bubble Bass shows up again, confident that he’ll beat SpongeBob again. SpongeBob gives him his meal perfectly until Bubble Bass reveals that SpongeBob messed up yet again! That is until SpongeBob notices something. It turns out that Bubble Bass was hiding the pickles the whole time to get free meals and harass restaurants. With his scam and cover blown, Bubble Bass hightails it out of there as fast as his girth allows. The crowd gives SpongeBob three cheers and Squidward three boos, the last one (“Boo! You stink!”), ending the episode.