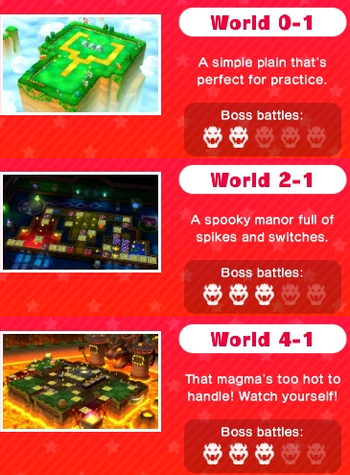 Mainly a video game trope, this describes the odd phenomenon in which the landscape the characters travel through gets steadily scarier and more esoteric as they get closer to the end of their quest.

The adventure almost always starts off in a sleepy village nestled within a landscape of green meadows and idyllic woodland. After thoroughly exploring an underground crypt or dungeon, the adventurers break out into the wilderness: passing through a huge forest, they cross a searing desert for brief R&R at a sunny beach and a diving detour. Upon wading through a foul-smelling swamp, they arrive in a humid jungle, beyond which lie the lands of the dead, icy glaciers, and fiery lava landscapes. A mighty mountain, an ominous temple, or an outright gimmick level may be wedged in-between stages at any point before the climax, which usually takes place in a burning wasteland, literal Hell, an intimidating giant machine, or an outright Eldritch Location.

This can be justified if the lands they visit are steadily more influenced by the Big Bad. Often, however, this isn't the case, and the landscape just happens to look more threatening as the story goes on, even if it means placing the treacherous ice level next to the slightly-more-treacherous volcano level. Another possible reason is that the land's steadily rising outlandishness is to signify that the characters are getting farther and farther away from familiar territory: things like their hometown and other villages or landmarks they visit regularly in their daily life. Any place tends to feel a little bit scarier during the first visit, and having the environment get more and more imposing as the journey continues helps convey the feeling that the heroes are in uncharted waters, at least for them.

Remember, this is about the appearance of the area, not its actual threat level. Characters might travel through the creepy Lost Woods completely unscathed, whereas the pleasant-looking plains could be the site of a climactic battle in which hundreds die. If the plains come after the lost woods, it is not this trope.

This often overlaps with Villainous Badland, Heroic Arcadia. In this case, the progression of increasingly ominous and hostile landscapes matches the journey from the heroes' home to the villains' — the game will begin in the lush fields and picturesque woods of Arcadia, progress through increasingly harsh wilderness areas such as deeper forests, mountains or sun-scorched deserts, and end among the rocky wastes, lava fields, refuse heaps and pounding factories of the Wasteland.

The popularity of the Green Hill Zone trope is based off this, as game creators prefer ease players into the game by having a level that is less inherently threatening.