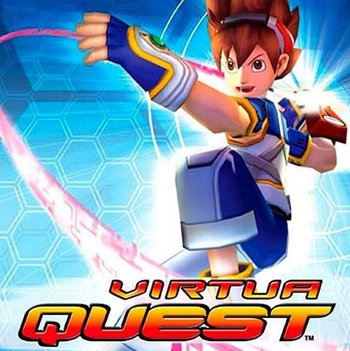 Virtua Quest, known in Japan as Virtua Fighter Cyber Generation: Ambition of Judgment 6, is an Action RPG spin-off of Sega's seminal Virtua Fighter series of 3D fighting games. It was co-developed by Sega AM2 and TOSE Software for the Nintendo Gamecube and Playstation 2, and was released in Japan in August 2004, with an American release the following year.

Virtua Quest takes place 20 Minutes into the Future, where society revolves around a vast virtual reality network known as "Nexus". Players assume the role of Sei, a 14-year-old boy who takes up a job as a "Hunter", exploring the forgotten corners of Nexus in search of valuable lost data. His dive into one lost server leads Sei to uncover a "Virtua Soul", ghost data containing the martial arts techniques of those who competed in the World Fighting Tournament of the late-20th and early-21st centuries. Unfortunately, Sei is not the only one looking for Virtua Souls; the criminal organization known as Judgment 6 is also hunting for them to further their own nefarious ends. It's a race against time as Sei must thwart Judgment 6's ambitions and get the Virtua Souls first!