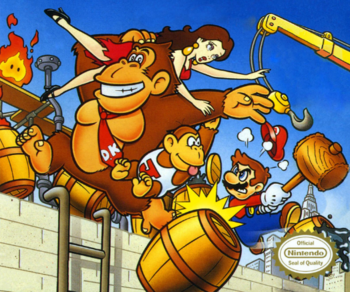 It's like Donkey Kong, only much, much bigger.
Advertisement:

Donkey Kong '94note tentative title used in development for differentiation, as it is officially known as "Donkey Kong" and alternatively referred to on the title screen and Japanese logo as "GAME BOY Donkey Kong" is a Puzzle Platformer released on Nintendo's Game Boy handheld in 1994. It is the first game to have Super Game Boy enhancements: color support, some enhanced audio, and a custom border designed to look like an arcade cabinet.

The game starts with the pretense of being a straight Updated Re-release of the original 1981 Arcade Game. The exact same Excuse Plot is used here—Donkey Kong has kidnapped Pauline, and Mario must chase him down. The game even opens with the same four levels of the original, but after the fourth level is beaten, the arcade ending begins, and is immediately subverted when Donkey Kong comes back and takes Pauline again. What follows is 97 levels of lock and key puzzles spread across nine more worlds.

Every four levels, you face off against Donkey Kong himself, occasionally accompanied by Donkey Kong Junior. The last stage of each world is a direct boss battle against the big guy where you get to throw the barrels back at him.

Several game mechanics are in play:

Mario vs. Donkey Kong for Game Boy Advance was originally planned as an remake of this game; the working title was Donkey Kong Plus, and it was to feature Nintendo GameCube connectivity and a Level Editor.