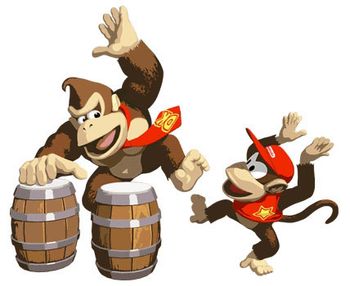 They're finally here, performing for you...
Advertisement:

At the Turn of the Millennium, video game creators Nintendo and Rare were at a parting of ways. After years of cooperating on hit franchises like Killer Instinct, Banjo-Kazooie, and of course, the Donkey Kong Country games, Nintendo, having acquired a large part of Rare's assets, had the chance of buying out the company once and for all. They chose not to, selling Rare's services to Microsoft instead. Thus Donkey Kong was left largely adrift and directionless.

Without any more Country games to come in the future (or so it seemed at the time), Nintendo made an effort to distance the character from Rare's stint with him. Since Rare had distanced him so much from his roots at the arcade, it felt illogical to return to the barrel-rolling, ladder-climbing, girder-grappling days of yore. So they made two offbeat games starring the character. One was a platform game, similar to Donkey Kong Country: Donkey Kong Jungle Beat. The other was a rhythm game you play with actual drums.

Donkey Konga is a rhythm game you play using the GameCube bongo controller, literally a contact-sensitive controller shaped to resemble a set of bongo drums. You strike the correct drum at the correct time as depicted on the screen, to the tune of public domain music, old-school Nintendo themes, and some songs by popular artists such as Willie Nelson and Devo. The game sold well enough in Japan to warrant a pair of sequels, but in the west, it was poorly regarded and flew largely under the radar, leaving Donkey Kong 3 unreleased in the West.