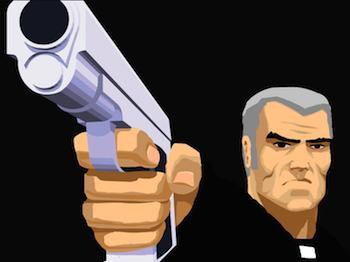 ""The day of reckoning is at hand."
— The Priest
Advertisement:

Divine Intervention is a flash browser game created by Jim Bonacci. Bonacci would later go on to make Happy Wheels.

In the midst of a demonic apocalypse, a lone priest is tasked by God with cleaning things up.

. Be warned, it is very much Nintendo Hard, and is even less tolerant of mistakes than his better-known game!

Unrelated to the Pokémon fanfic.