Video Game / A Duck Has An Adventure 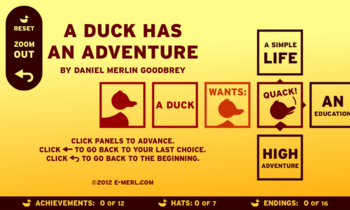 A Duck Has An Adventure

is a Gamebook-style flash game note  or rather a hypercomic, as the creator himself calls it by Daniel Merlin Goodbrey who also created The Empty Kingdom, and Icarus Needs.

It all starts with an ordinary, nearly featureless duck whose life the player influences.

Every once in a while, the story hits a panel with multiple arrows around it. This is a branching point where the player gets to decide how the story progresses by clicking on one of the two (or three) panels pointed at by an arrow.

The story then continues in this fashion until it reaches an ending. There are 16 possible endings in total, and the player is encouraged to discover all of them.

And to make the experience more fun, there are also 12 achievements and 7 hats to collect along the way!

An outline of the game, including hats and achievements