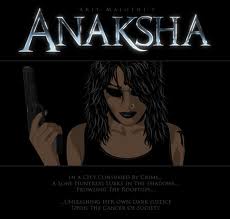 From the ashes will arise a pure and virtuous angel, wearing a crown of fire upon her head and carrying a bright white star in her right hand. She will speak with a voice of thunder, and will be feared by both men and demons alike.
— Unknown Indian Philosopher and Astrologer, 400 AD
What separates a vigilante from a criminal? I've asked myself this question many times. Yet I don't know the answer. I only know what I stand for...and what I believe in.
— Anaksha
Advertisement:

focuses on the titular vigilante assassin who takes down the scum of the society of Santa Lina, one of the most corrupt cities in the US.

The first major game, Anaksha: Female Assassin, was released on 1st of August, 2008. There, she starts by targeting domestic abusers, but slowly widens her net, and in doing so makes the city safer. When Vincent St. Claire, the man whose act of evil first encouraged her to start her crusade, resurfaces, Anaksha becomes determined to take him down once and for all.

The official second installment, Anaksha: Dark Angel, was released on 10th December, 2011. It has Anaksha, known to the media as the "Virgo Killer," in perhaps her most epic adventure yet as she is framed for the murder of an innocent teenager and must find a way to clear her name in addition to finding a kidnapped orphan and putting a stop to a deadly drug epidemic sweeping Santa Lina.

Three Mini-Adventures were also released in between the two main installments. They play like graphical adventure games and are structured with a Fetch Quest/Chain of Deals setup, helping to explore Anaksha's character a bit more. In the first Mini-Adventure, A Sea of Fire, Anaksha is charged with finding and killing the dangerous owner of a club while helping various people out along the way. The second Mini-Adventure, A New Threat, focuses on Anaksha's quest to get to the bottom of the trade of a new drug that is sweeping through the Hell's Cats district of Santa Lina like wildfire, a quest that leads to the events of Dark Angel. In addition, there's another short Mini-Adventure, Quick Stop, that acts as an interquel between A Sea of Fire and A New Threat, where Anaksha has to make a pit stop and get on the phone with her contact, which proves a bit tougher than it sounds.

Tropes Featured in the series: