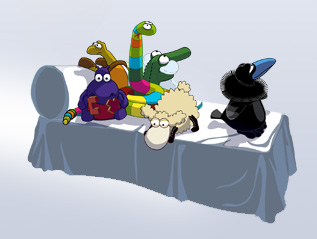 "In a soulless world...its inhabitants spineless, spoiled by a consumerist culture, and yet...lonely. This gives birth to frustration...and makes one even lonelier. The last friend remaining is...the cuddly-toy. These creatures can't defend themselves. They cannot run away. Insanity...is their only way of escape."
Advertisement:

Die Anstalt - Psychiatrie für misshandelte Kuscheltiere ("The Asylum - Psychiatric Clinic for Abused Cuddly Toys") is a German point-and-click game made in 2003. The player takes on the role of a psychiatrist treating plush toys that have been driven to mental disorders due to abuse by their owners. Gameplay consists of selecting a patient to treat and then selecting different treatments from a list on a clipboard. Choosing the right treatments at the right time is essential to win, although there are several that won't do any harm or help.

The game started with only three patients, but has since expanded to six. The current list is as follows (in order of creation):

Kroko: A paranoid crocodile with severe aquaphobia. He has a pillow for a Security Blanket.

Lilo: A hippo with symptoms resembling autism. He never speaks, and spends all his time trying to solve a wooden puzzle.

Dolly: A chronically depressed sheep who sometimes believes herself to be a wolf. She has fits of anger from time to time.

Sly: A rattlesnake with severe ADD and delusions, who sometimes holds extended conversations with his rattle. Added in 2007.

Dub: A hyperactive turtle who spends all his time jumping rope, stopping only to reset his stopwatch. Added in 2009.

Dr. Wood: A raven who's a renowned psychiatric doctor and always carries around a notepad and pencil. Unlike the other patients, you actually start out as trying to converse with him on a professional level until it becomes clear that he has deep-seated psychological issues himself. Started in 2010, added completely in 2011.

Based on posts on the corresponding Die Anstalt Facebook page, there may well be a seventh patient on the horizon, although since there has been no update as of 2016 it may be Vaporware.

The game was formerly playable here

, although following the depreciation of Flash player, the site no longer hosts Die Anstalt. Instead, a port for mobile devices can be found here