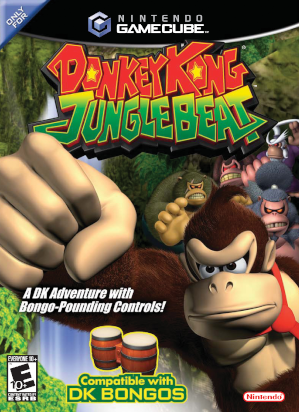 Donkey Kong Jungle Beat is a platform game starring Donkey Kong, made in 2004 by Nintendo for the GameCube (and later released on the Wii). Although superficially similar to the Donkey Kong Country series, the game has little to do with Rare's stint with the character, notable in that it features none of the characters introduced in The '90s. Be that as it may, some elements from Donkey Kong Country, such as riding animals and collecting scattered coins and bananas, do feature in the game.

The storyline is minimal (and even then, it was only added by the Wii version): A kingdom of small monkeys living in the jungle have had their bananas stolen by a group of evil kings, led by the Cactus King, so they call on the big ape to retrieve them and teach the baddies a lesson on their behalf.

Collecting scattered bananas increases Donkey Kong's stamina; as an interesting feature, the more elaborate the acrobatics he uses to reach them, the more stamina they're worth. The stamina comes in handy at the end of every other stage, as Donkey Kong faces off with one of the evil kings.

The original GameCube release had Donkey Kong's moves controlled via a set of bongo peripherals normally used to play the Donkey Konga rhythm games. Said control scheme works much better than it sounds. Meanwhile, the Wii release used more traditional platforming controls, making use of actual buttons and the control stick, but also mimicking the bongo controls to some degree. All of this naturally makes for a very interesting and unusual gaming experience.

Due to its unusually high amount of brutal (albeit bloodless) violence, it became the first game to be rated E10+ by the ESRB.