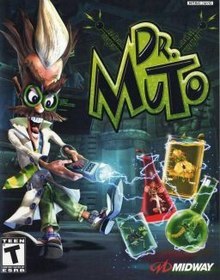 Why clone when you can morph?
Advertisement:

A Platform Game released by Midway Games in 2002 for PlayStation 2, Xbox and Nintendo GameCube (also ported to Game Boy Advance), Dr. Muto was the final game produced by Midway Games West (formerly known as Atari Games) before the studio shut down.

The eponymous Muto, having grown up a fledgeling-Mad Scientist nerd shunned for his dangerous or just plain disturbing experiments, sees his chance to be liked when his home planet of Midway is forced into an energy crisis by the excessive power demands of the interplanetary corporation owned by Muto's rival, Professor Burnital. The doctor designs and constructs a machine that, he says, will be able to provide free, clean energy for up to a dozen planets, and his idea is actually put through as a possible solution.

As Muto says in response to scepticism from reporters before the machine's activation, "What Could Possibly Go Wrong?"

Well, as it turns out, Muto's machine was sabotaged in secret by Burnital, causing it to instead malfunction and detonate the planet mere seconds after being turned on. Whoops.

Only the doctor's laboratory survived the explosion, floating on a chunk of land in space and only kept inhabitable by the extensive life support system installed by Muto. There, he decides to create another device with the capacity to rebuild the planet, and quickly completes the design of his "Genitor". However, he's missing both the components needed to construct the machine and the special fuel to power it, both of which can be found on the many worlds controlled by Burnital Industries. Muto leaves in his teleporter to collect the stuff he needs... and perhaps get back at Burnital along the way.