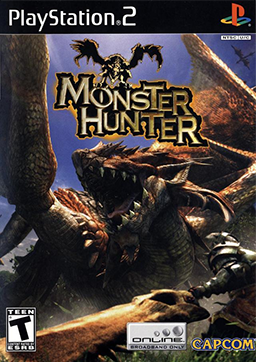 Where it all started
Advertisement:

Monster Hunter is the first installment in the Monster Hunter franchise, released for the Playstation 2 on March 11, 2004 in Japan, September 21, 2004 in America and May 27, 2005 in Europe. The game's flagship is Rathalos, who would to an extent go on to become the most recognizable monster in the franchise.

The game puts you in the position of a newbie hunter from the small town of Kokoto Village, where you take missions from a Hunter's Guild to hunt down and kill or capture monsters of all kinds that threaten the livelihoods of the villagers. As you progress and gradually defeat stronger monsters, you grow in strength and experience, gaining increasingly powerful armor and weapons with the parts you obtain from the many monsters you defeat. There was also an online room meant for the "High Rank" (where you fight stronger versions of the monsters you've fought so far and new ones) and multiplayer gameplay where you and other people could gather to defeat monsters quicker or deal with very powerful monsters that few can take down alone. The online servers were shut down in early 2008 in the West and 2011 in Japan; as a result, neither High Rank nor the online multiplayer are legally available anymore. The game was part of an initiative of Capcom to make online-oriented videogames, hoping that one of them will break the 1 million copies sold threshold, this game and Resident Evil: Outbreak both were the two games to succeed at that.

It received an expansion named Monster Hunter G with an added "G-Rank" that allowed you to fight even tougher versions of the monsters you encountered already and a whole slew of subspecies of existing monsters with differences in attacks and behavior as well as new materials to craft equipment with; among those subspecies, Azure Rathalos serves as the flagship monster. It released on January 20, 2005 for the Playstation 2 and later received a re-release for the Nintendo Wii on April 23, 2009, both the PS2 and Wii versions of G were released only in Japan. The online servers of the Playstation 2 version closed on early 2011, while those of the Wii version closed in 2014 alongside the online services of the system as a whole.

In late 2005, a mildly reformulated version of Monster Hunter G called Monster Hunter Freedom was released for the PlayStation Portable in an effort to boost sales for the console, it worked very well turning the games into a rather iconic part of the PSP lineup that led to sequels being released for the system. This handheld entry was developed by an alternate team within Capcom, who would go on to reprise their roles with all subsequent handheld games in the series except Monster Hunter 3 Ultimate and both versions of 4. The game's flagship monster is still Rathalos, but also introduces a new monster to the bestiary (Yian Garuga). 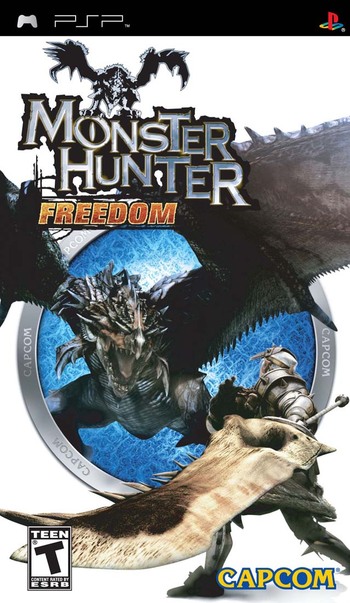