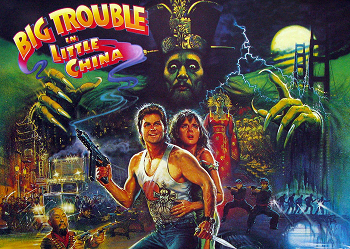 It is a known fact of social sciences that minority ethnic groups in a foreign country tend to bunch together, often for company and mutual protection — not to mention, for new immigrants, being able to talk to people. In the American West through the 1880s and '90s, mob violence against the 'heathen Chinee' living in smaller towns led to the survivors' leaving to live in a few enclaves in the larger cities.

One manifestation of this is "Chinatowns

", which feature in countless cities worldwide. Streets with paifang arches at the entrance, full of Chinese restaurants, shops, acupuncturists, and so on, they have become a rich source for scriptwriters (who for some reason have not noticed how modern day Chinatowns have become mostly pan-Asian affairs, with Chinese herbal stores, Japanese electronic stores, and Vietnamese noodle shops all next to each other).

Want to have Triad members in a story? Have them in Chinatown. The odd Priceless Ming Vase being sold illegally? Chinatown. Opium Dens? Chinatown. People who know martial arts? Chinatown. You don't even need to leave your own city!

Additional note: if someone is trying to skip town in the Northeastern US, they may end up in Chinatown for the notorious—but cheap and until recently little-known—bus services

at some point even though those are only done during Chinese New Year.