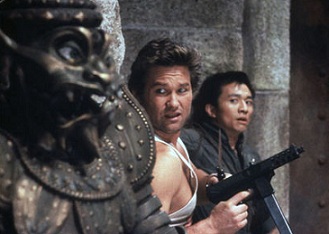 Peripheral vision sold separately.
"Oh, that's cheating; sneaking up! Did you have your legs on silent?"
— The Doctor (regarding the Cybermen), Doctor Who, "The Next Doctor"

Our hero is walking down a corridor in the Big Bad's ship/castle/compound, and suddenly he hears *THUNK THUNK THUNK*! He has just enough time to duck down a side hallway before a squad of Mooks walk past him. And thus our hero is saved by noisy footwear.

What our hero has encountered is a group of Stompy Mooks. Stompy Mooks are basically mooks who simply cannot be quiet when they move around, even if they tried. These can include anything from Robot Soldiers, heavily armored soldiers, or just normal, everyday soldiers with noisy boots. This is usually played straight to make the viewer understand exactly what's going on and why the hero just ducked down a hallway.

Of course, when the plot requires it, Stompy Mooks can be as quiet as church-mice.