Film / Chairman of the Board 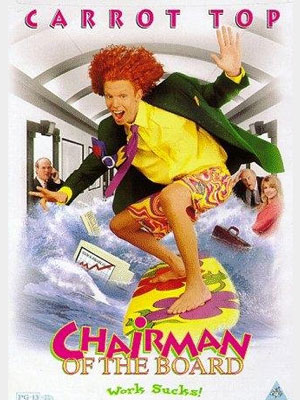 After establishing himself in The '90s as America's premier prop comic, Scott Thompson — better known as Carrot Top — made the jump to feature films with this 1998 comedy directed by Alex Zamm.

Carrot Top stars as Edison, a failed inventor and surfer dude who lives with his two surfer buddies, Ty & Zak, in southern California, constantly convinced he's invented "the pet rock of the 90s." No company ever invests in anything he comes up with, and he's stuck wandering from one dead-end job to the next, constantly facing the wrath of his landlord, Ms. Krubavitch (Seinfeld's Estelle Harris) One day, he comes across an old man who's having car trouble, helps him with the repairs, and goes surfing with him.

That old man was Armand Macmillan (Jack Warden), who is so inspired by Edison's penchant for inventing that, some time later, after his death, it is revealed that he left Edison his invention corporation, Macmillan Industries, in his will. Armand's nephew, Bradford (Larry Miller, in full Smug Snake mode) is left Armand's "most prized possession," his surfboard. This boxes his plans to inherit, and then sell, the company for millions of dollars, and he concocts a scheme to hustle the company out of Edison's hands. Meanwhile, Natalie Stockwell (Courtney Thorn Smith), the Vice President and overseer of production, finds herself frustrated, yet oddly charmed by this new quirky chairman.

Tropes associated with Chairman of the Board include: