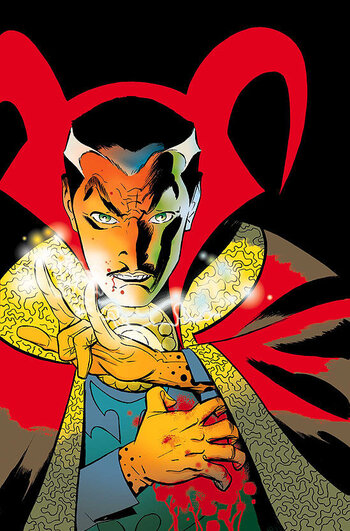 Just another day at the office for the Sorcerer Supreme.
"I have been accused of being unrelenting. Merciless. Perhaps I am. For I have looked into that heart of darkness. I know the chill of evil. I have clearly seen that, no matter what, sometimes the night cannot be kept at bay. So I carefully choose my battles. I fight those I can win. And make sure the ones I can't win are worth dying for.
— Dr. Stephen Strange, Shadows and Light vol. 1 #2
Advertisement:

Doctor Stephen Vincent Strange is Master of the Mystic Arts and the Sorcerer Supreme of the Marvel Universe, which means that he is in charge of protecting it (mostly from powerful supernatural menaces). Strange first appeared in Strange Tales #110 (July, 1963), created by Stan Lee and Steve Ditko. He has been appearing ever since, featured as a star of his own series, in team books, and as a frequent guest star in other people's titles. His story has been adapted into a live-action Made-for-TV Movie, an animated DVD movie and is part of the Marvel Cinematic Universe, with the character being first introduced in his first feature film adaptation.

In the comics, Dr. Stephen Strange was a famous surgeon who lost his operating skills after his hands were injured in a car crash. Obsessed with finding a cure, Strange sought a "miracle worker" in Tibet: the Ancient One, who is actually the current Sorcerer Supreme. After passing a subtle test of worthiness, Strange was accepted as the Ancient One's student — in place of his former one, Baron Mordo, who would become Strange's enemy. Dr. Strange returned to New York with the new mission of using his magical powers to secretly protect people from supernatural evil; Wong, a Tibetan servant, accompanied him upon his return. After the Ancient One's death, Strange gained the title of Sorcerer Supreme. Amongst Strange's most famous adventures were preventing the evil Dormammu from conquering Earth and falling in love with Dormammu's niece Clea (who eventually came to Earth to live with him as his apprentice — and lover).

Despite having his series canceled years ago, Strange is still a recurring character in the Marvel Comics universe. He has starred in many Defenders stories and has guest-starred in many other comics, usually to help out other heroes against magical menaces. He is a long-time ally of The Avengers and has had an on-and-off membership in the New Avengers (currently 'off' — officially. Unofficially, still very much 'on'). In 2011 he was involved in the Fear Itself storyline with several of his old Defenders teammates — this reunion prefigured a revival of the Defenders title in late 2011 to deal with the threat of Nul, Breaker of Worlds, one of the entities empowering the Serpent's "Worthy." He stood with the Avengers in Avengers vs. X-Men. He also has a role behind the scenes as one of the "Illuminati" — a secret group of high-powered figures who try to deal with problems without the rest of the Marvel Universe becoming aware of it.

In 2009 he stepped down from the office of Sorcerer Supreme, feeling that he had become compromised after resorting to Dark Magic to save himself and the New Avengers. The office passed to Brother Voodoo, who died three years later, leaving Strange to face the wrath of Jericho's brother Daniel. He regained his title in November, 2012, after defeating Daniel and showing that he could handle dark magic to protect his friends without letting it control him.

He should not be confused with Dr. Strangelove, or Professor Hugo Strange, the Batman villain. (Stephen's popularity, in fact, seems to have been a driver for Hugo being largely sidelined by DC for decades; Batman: Arkham City is the first time Hugo's gotten major attention in a long, long time.)

Doctor Strange was the unofficial inspiration for the lead character in Doctor Mordrid, who was made into a Captain Ersatz to avoid legal issues. The good doctor joined the Marvel Cinematic Universe with Doctor Strange (2016) as part of Phase 3, on October 5th, 2016, portrayed by Benedict Cumberbatch.