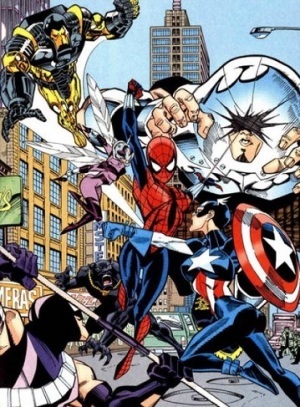 Some of the MC2 heroes in a typical comic book situation.
Earth-982
Advertisement:

An Alternate Timeline Marvel Universe where everyone (well, almost everyone) has had Spin-Offspring and following the retirements, deaths, disappearances and disbandings of their parents/mentors/favorite super-teams, the kids have taken up the torch.

It's also Lighter and Softer, being one of Marvel's 'Verses aimed at kids. With the exception of Spider-Girl, all of these series have been canceled, though the characters keep showing up in Spider-Girl and new miniseries have been coming out for the last few years.

Getting its start as a What If?, the 'verse has expanded to include the following series and miniseries: