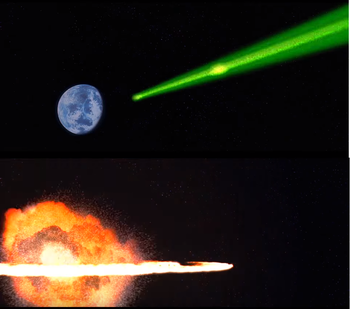 "I have chosen to test this station's destructive power on your home planet of Alderaan."
"One needs only to look upon the once-green planet of Mars to understand the full scope of the devastation the Rüstov leave in their wake."
— Jonas Smart, Jack Blank: The Accidental Hero
Advertisement:

How do you know that the problem the heroes are dealing with are a real threat? Because the threat in question hit another planet first, and they're coming for the plot-relevant planet next. If that next planet is Earth, see Earth Is the Center of the Universe.

Compare Earth That Was and Phlebotinum Killed the Dinosaurs, for when the crisis struck closer to home eons earlier. Usually the result of Planet Looters, a Planet Eater, or Aliens Are Bastards. Can result in an Earth-Shattering Kaboom.

A special dramatic mention should be made for plots that use Mars in the place of the planet that was previously destroyed. Since Mars in Real Life is well-understood to be barren and lifeless, it already gives a very chilling demonstration of what the threat is capable of, as well as additional chills because it happened so close to us.

Yes, a certain former planet qualifies for this trope as well. It's in our solar system, it counts. Compare Doomed Hometown.