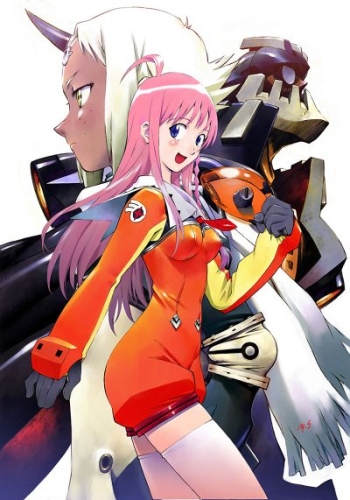 Any sufficiently advanced technology is indistinguishable from (Groovin') magic.
Advertisement:

A six-volume OVA that serves as a sequel to GunBuster, released as a 20th anniversary project for Studio Gainax. With director Kazuya Tsurumaki at the helm, who also directed FLCL, this series could easily be described as the love-child of the two series. While its source material is very story-centric, DieBuster maintains a strong overarching story while including more action and style that would set the groundwork for Tengen Toppa Gurren Lagann three years later.

The OVA follows Nono, a rather klutzy girl who leaves home to try and become a Space Pilot. Unfortunately for her, she ends up in a run-down cafe in the middle of nowhere. One day, a girl named Lal'C Melk Mark, of the elite Topless units, amazes Nono by saving her from some Space Pilot perverts, and she immediately idolizes her. Nono follows her back to the city, where she ends up in the cross-fire of a space monster attack. Lal'C fights in her Buster Machine, Dix-Neuf, but it is actually Nono that saves the day, sans-mecha, with the classic Inazuma Kick. The story takes off with the realization that Nono is not all that she appears.

The plot revolves almost entirely around character interaction, with the overarching premise of the Space Monster attack serving as a motivating factor. Nono knows she comes from a lowly background, and even with her abilities she spends much of the next few episodes trying to prove herself. Lal'C has to come to grips with being the mentor to this bubbly girl, and slowly sees her personality shift as Nono's boundless optimism has an effect on her. Tycho, another Topless pilot, not only resents the other Topless because of an unfortunate event in her past, but even has suicidal tendencies. Finally, Nicola, an older Topless, engages in a scheme to try and keep his rapidly dwindling powers, with great consequences.

The parallels between GunBuster and DieBuster are readily apparent. Both series focus on two girls - one, a hyperactive girl with natural talent but no actual skill; the other, a more stoic figure, a veteran of training, and the one person her compatriot idolizes. Both stories revolve around human emotion and the draining effect a drawn-out war can have on the combatants and their relationships. They both idealize the principle, common to the Super Robot genre, that with hard work and determination, and The Power of Friendship, anything is possible. Finally, they also realize, rather poignantly, that even with incredible power, sacrifices must be made. The duology is a testament to the Mecha genre and a celebration of everything Studio Gainax had done up to that point, and should definitely be watched by any anime fan.

DieBuster was released in the US by Discotek Media under the name GunBuster 2.

Tropes appearing include, but are not limited to: