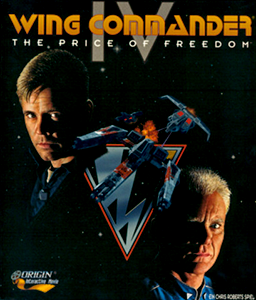 The price of freedom is betrayal.
Advertisement:

Wing Commander IV: The Price of Freedom is the fourth main game in Chris Roberts' Wing Commander science fiction space combat simulator video game series, produced by Origin Systems and released by Electronic Arts for the PC in 1996 and the Sony PlayStation in 1997 (the game was also released on the North American Play Station Network Store in 2009).

The first game set after the end of the Terran-Kilrathi War, Wing Commander IV depicts a galaxy in the midst of a chaotic transition, with human civilians, Kilrathi survivors and former soldiers on both sides attempting to re-stabilize their lives.

Colonel "Maverick" Christopher Blair, having retired after the Kilrathi War, is recalled to active duty by his old comrade Todd "Maniac" Marshall. Apparently, there's chaos in the Border Worlds with unarmed transports and other sites being massacred by pirates and terrorists. Admiral Geoffrey Tolwyn believes it's only a matter of time before all-out war breaks out between the Border Worlds and Confederation.

Things are not as they seem, however...

A novelization, by William R. Forstchen and Ben Ohlander, was published on October 1, 1996.

The game contained full motion video starring Mark Hamill, John Rhys-Davies, and Malcolm McDowell, and many of the other members of the previous game's cast.