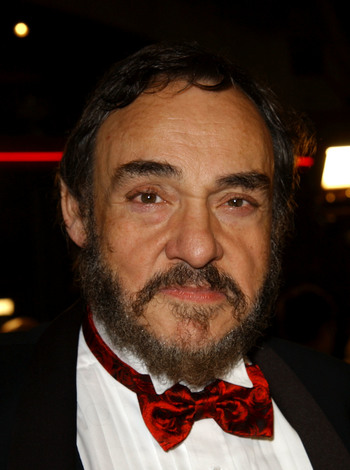 "Villains are a lot of fun. My villains have a lot of tongue-in-cheek. They are sometimes conscious of and a little bit gleeful of their villainy."

John Rhys-Davies (born 5 May 1944 in Salisbury, England) is a Welsh actor and voice actor best known for his roles as Sallah in Raiders of the Lost Ark and Indiana Jones and the Last Crusade, Maximillian Arturo in Sliders and Gimli in The Lord of the Rings trilogy. His characters are often jolly, heavyset Boisterous Bruisers, or intimidating, hammy villains. He is also the voice of Cassim from Disney's Aladdin and the King of Thieves, Man Ray from Spongebob Squarepantsnote he was replaced by Bob Joles after his first appearance, though, Hades in Justice Leaguenote he was also replaced by Joles when Hades reappeared in Justice League Unlimited, Macbeth from Gargoyles, Thor in the 90s Marvel cartoons (Fantastic Four and The Incredible Hulk), and the voice of the narrator in the game Quest for Glory IV. Bizarrely, he has been the go-to veteran actor for super-cheesy, low-budget science fiction and horror films, especially Syfy original movies such as Anaconda 3 and Chupacabra. Before that, he was in the Indiana Jones ripoff 1985 version of King Solomon's Mines. In 2016, he played a major role as the king in the MTV fantasy series The Shannara Chronicles.