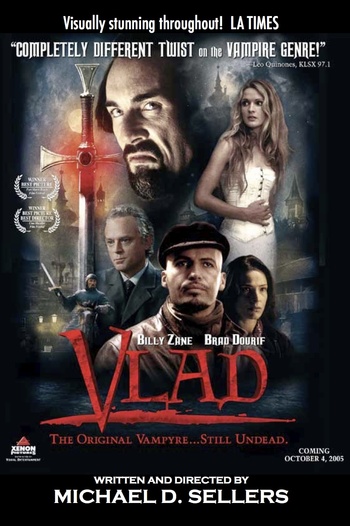 A 2003 horror movie with Billy Zane, Brad Dourif and Francisco Quinn as the titular character.
Advertisement:

In 1447, Vlad II Dracul of Wallachia is betrayed by Iancu de Hunedoara of Transylvania, who orders his execution before his sons Vlad and Radu. Before his death, he hands over his medallion which belongs to the Order of the Dragon, a monastic order from which he belonged to him, and he now passes it over to his son. Vowing revenge on the people that betrayed his father, Vlad becomes a monster that would kill and torture thousands, being transformed into an immortal and cursed creature, a vampire.Fast forward to present day, and four foreign exchange students are sent to Romania in order to write their respective thesis on Vlad the Impaler. What they don't know is that their dean responsible for sending them is also a Order of the Dragon member, and it's revealed that one of them possess Vlad's medallion, which inadvertently displaces him from his time period, bringing him into to the future alongside a mysterious maiden named Ilona. With Vlad now unleashed into modern times, the students must seek the Order's help to find a way to defeat him.

Vlad contains examples of the following: