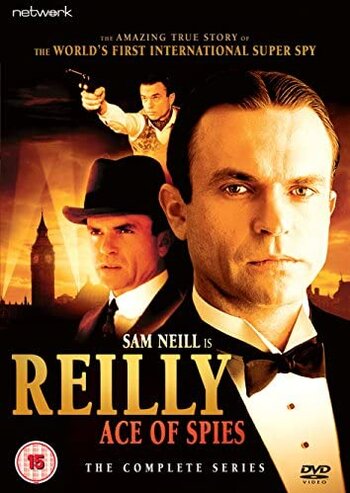 A 1983 ITV 12-episode Mini Series, exec produced by Verity Lambert, written by Troy Kennedy-Martin and based on a book about Sidney Reilly's

life by the son of one of the main characters. Much of Reilly's life is unclear (he was a master of deception) and the accuracy varies - inevitable, given that the real Reilly's past is obscure to the point where even his birth name is doubtful! Some of the stuff is debated by historians, especially the "Zinoviev Letter", but any inaccuracies are largely from the source material, rather than Martin not doing the research.

It covers Reilly from 1901 to 1910, then moves to An Arc involving the "Ambassador's Plot" against the Bolshevik government in Russia in 1918.

Sam Neill plays the titular character and this reads a lot like a James Bond audition tape- he was later screen-tested for The Living Daylights. While he didn't get the Bond gig, however, Martin Campbell, who directed most of the episodes, did, directing two of the best-regarded instalments, Goldeneye and Casino Royale (2006). He also teamed up with writer Troy Kennedy-Martin again for another classic television serial, Edge of Darkness, a few years later.

This Mini Series contains examples of: