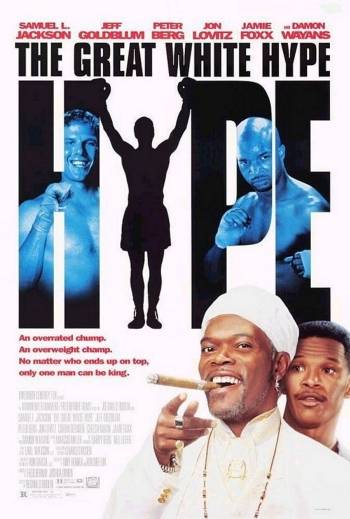 "Some say this upcoming title fight is built around racism! But is it racism that electrifies people? Across the globe? Or is it a pride in your tribe?"
—Mitchell Kane
Advertisement:

The title is a play on the title of the 1970 film The Great White Hope, but it is not based on an actual boxing contest. It was inspired by Larry Holmes's 1982 fight with Gerry Cooney and Mike Tyson's 1995 return fight vs. Peter McNeeley.

James "The Grim Reaper" Roper (Damon Wayans), the undefeated heavyweight boxing champ of the world, defeats his latest challenger with ease and visits an after-party thrown by the Don King Expy the Rev. Fred Sultan (Samuel L. Jackson), a conniving and manipulative businessman who also acts as Roper's fight promoter.

The Sultan relays some bad news to everyone: The fight was a financial flop, as a number of the champ's fights have been lately. Sultan deduces the reason that boxing events have become far less profitable is because white audiences are disinterested due to black fighters dominating the sport. The Sultan predicts that a white contender, even one without a viable chance of winning, would create a huge payday for all involved in the fight (citing the Larry Holmes vs. Gerry Cooney battle in 1982 and the way racial tensions were blatantly and purposefully played up for the event), and he vows to either find or "create" a white contender in no time at all.

Eventually, after some puzzling and searching since there are no credible white contenders around to challenge Roper, Sultan learns about Terry Conklin, a white fighter and Golden Gloves champion who knocked out Roper as an amateur. Conklin never fought as a professional and has long since retired from the ring and become an obscure socially conscious rock and roller who donates all his (meager, at best) profits to help the homeless. It only takes a few minutes of talking for Sultan to lure Conklin back into the ring, but Sultan soon has to deal with additional problems, including the rightful top contender, Marvin Shabazz, who is furious at being passed over for a title shot, and a freelance journalist named Mitchell Kane who is looking to expose Sultan's corruption and bring him down.

Hilarity Ensues as Sultan talks his way around and through all these problems en route to putting on the fight.