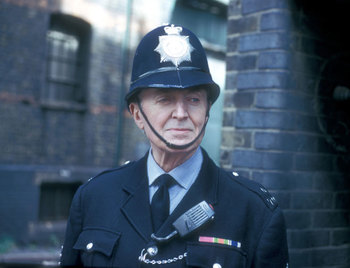 Dixon of Dock Green (1955-1976) was a long-running Police Procedural from The BBC. Set in the fictional Dock Green police station and area of London, the series focused on Sgt. George Dixon, Old-Fashioned Copper in every sense of the word that doesn't involve Gene Hunt and The Sweeney-style shenanigans. In short: a British Bobby.

Although it occasionally dealt with corruption and "bent coppers", the portrayal of the police was overwhelmingly sympathetic (and the criminals usually caught and "banged up"). This niceness left the show open to criticism and its supremacy as top UK cop show was eventually challenged by the altogether grittier Z Cars and downright violent The Sweeney.

A key feature of the show was the Framing Device of an opening to-camera narration by Dixon which always began, "Good evening, all," (shortened in popular usage to "Evening, all,") and a closing narration-cum-homily which nearly always ended, "Goodnight, all."

The character of George Dixon was originally encountered in the Ealing Studios movie The Blue Lamp (1950), in which he was shot to death (by Dirk Bogarde's young tough).

It was revived in 2005 as a radio drama. Twelve episodes were produced over two years.