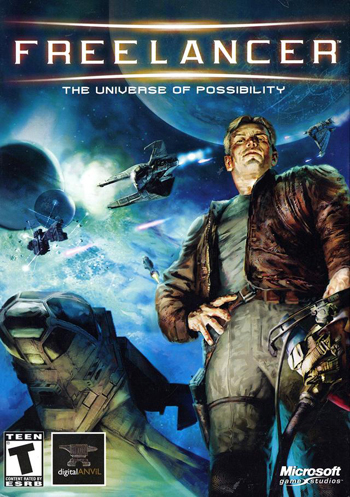 Liberty Bartender: To your good fortune in Liberty, sir.
Trent: Well, it can't get any worse.
Advertisement:

Freelancer is a game created by Microsoft Games and Digital Anvil, specifically by Chris Roberts, and is the Spiritual Successor to Privateer, a spinoff of his previous franchise Wing Commander, as well as a sequel to Starlancer. Unlike its predecessor which was a space flight simulator, this game is an Elite-like space exploration game.

In the 23rd century, Humanity is caught in an apparently endless war between two factions within the Solar System: The Alliance and the Coalition. After more than 100 years of uninterrupted war, the Alliance, on the verge of massive defeat, is so goddamn hell-bent on not surrendering before the Coalition, it spends massive resources as its last hope for survival: sending five huge spaceships filled with Human Popsicles to the Sirius system, far away from the conflict that separated Humankind for all these years.

Eight hundred years later, Humanity is thriving in the far-away Sirius sector, divided into four countries or "houses", each named after the spaceships that brought them there: Liberty (USA), Bretonia (United Kingdom), Rheinland (Germany) and Kusari (Japan); the fifth ship, the Hispania (Spain and Mexico), was lost in transit to Sirus, but its impact is still felt on the sector. A couple of conflicts have managed to erupt, but overall, the whole system is in peace.

Enter young pilot Edison Trent, a mechanician apprentice from Planet Leeds who, enthralled by all the massive wealth found on the Border Worlds, leaves his repair shop and goes out on a journey for "the deal of a lifetime". After a couple of months of hardships, he finally manages to score a deal for 1 million credits for a ton of boron. But guess what? Just when Trent managed to close the deal at the neutral ground of Freeport 7, two mysterious spaceships suddenly appear out of thin space and destroy the station. Trent barely manages to make it to an escape pod, which leaves him drifting in outer space. He is rescued and taken to Planet Manhattan. From there, he manages to land a job doing freelancer work for the Liberty Security Force.

However, things soon start to get really, really weird. Alien artifacts, previously nothing but highly expensive pieces of ancient art, are suddenly banned in Liberty, survivors of the Freeport 7 attack and those connected to them start to go missing, Rheinland's Chancellor begins acting surprisingly reckless in his diplomatic relationships with the other houses even as Rheinland is found to be involved in many strange activities, and Trent and his friends are completely sure an enormous conspiracy is going on. Will they manage to expose the mystery before it's too late?

The general concept of Freelancer is a Wide-Open Sandbox combined with a space shooter and an RPG. You can take any sort of job you want with any faction you want, you can just sit down and gather a lot of valuable resources, you can buy low and sell high at many stations, or you can raid corporate convoys and steal their stuff. There's also a main storyline, which leaves you with a highly powerful ship after clearing it (not to mention all the intrigue involved), but there's also a multiplayer mode where you can take missions along with anyone on the server, so it's a game that can be finished quickly, or take a really long time, and even has a game time counter that shows how long the game's been played total.

Technically and gameplay-wise speaking, Freelancer is possibly the best showcase of why breaks from reality are so acceptable, the most glaringly obvious example being the way outer space is presented. The game takes place in a 2-D Space, and the sense of scale is enormously distorted, but trust us, when you sit down and play the real thing, the game is, all in all, good enough to just make you not think about that. It also manages to make space feel huge and epic while remaining surprisingly compact.

Freelancer is also notable for having a very friendly control scheme, which lets you fly around your ship with the mouse (at the complete expense of joystick support), a couple of basic commands, and an easy-to-use HUD. As for the graphics, they're a little bit dated, but the game quickly makes up for it thanks to its beautiful nebulous backgrounds, its aesthetics and its camera effects. Freelancer is itself a very fun, very entertaining game, and with its apparently immortal aesthetics, its natural and straightforward control scheme and its excellently written storyline, and even despite its Vaporware development cycle, it still stands today as a living example of excellent game design.

Rumor has it that, before Microsoft pushed Digital Anvil to have the game ready for release, the original design was far more detailed than the final product, including six different endings, a dynamic economy and countless other things. The game as it stands is still of high quality, though, so it's worth wondering what it would have been like with these features.