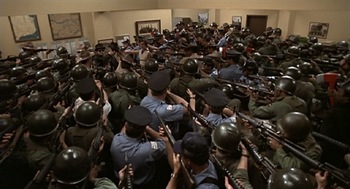 "Okay, okay, we'll share the donuts. Jeez!"
"How many cops are there in this town?!"
— Manta, Need for Speed Heat
Advertisement:

You're a criminal in a city who has just committed a crime. The police are on their way, but rather than run, you decide to risk a shoot-out. After all, you have a truly ludicrous number of weapons. Besides, even in a large city, surely the police won't throw more than 50 cars and a couple of helicopters at a problem before trying another strategy, will they?

A hundred cop cars, 20 helicopters, and at least 300 individual officers later, there still seems to be no end to the rampage. At this point you have to wonder whether or not the police force of this city simply has an unlimited budget.

This trope is common in any video game where you're acting as a Villain Protagonist. In most games where the police will chase after you, they will continue to send more police cars and helicopters (And whatever other resources they have in that particular game, up to and including tanks; Grand Theft Auto: San Andreas will even hit you with Harrier jump jets) until you evade them in some manner. No matter how many cars and helicopters you destroy, they always seem to have another ready to go.

This is especially egregious in games that keep track of how much damage you've caused the police. This number will easily reach into the millions, making you wonder at what point it would be more economical for the police to just bribe you to go away.

A subtrope of Artistic License – Law Enforcement and Infinite Supplies. Super-Trope to I Fought the Law and the Law Won. Compare to Lemming Cops, where the cops show absolutely no concern for their own personal safety. Sister Trope to Clown-Car Grave, the undead equivalent. Compare and contrast Police Are Useless.