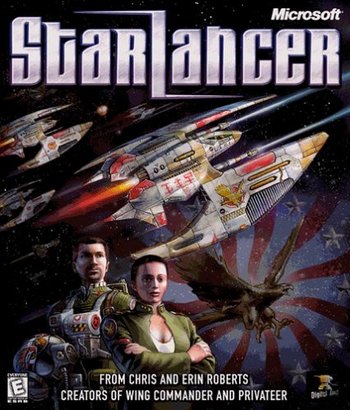 Starlancer is the prequel to Freelancer. It is a space-combat game which takes place during an intrasolar war between The Alliance and The Coalition. It was developed by Chris & Erin Roberts and Digital Anvil, and is a Spiritual Successor (or perhaps a spiritual remake) of Wing Commander, just as Freelancer is to Wing Commander: Privateer. (The game came out around the same time the Wing Commander movie did, and—whether by coincidence or not—the spacecraft in that movie would look more at home in this game than in their own franchise.)
Advertisement:

As the product of the creators of one of the most acclaimed Spaceflight Simulation Game franchises in history, you'd think this game would have got somewhere. It was released simultaneously on the Dreamcast; it had decent graphics (even today); it had non-crappy voice acting, sound and music; and—a big deal at the time—it boasted online connectivity for not just Competitive Multiplayer but Co-Op Multiplayer through GameSpy, one of the first flightsims to offer either. Despite this, it met a tepid reception, possibly due to questionable gameplay decisions made due to the game's World War 2 IN SPACE setting. Planned sequels, linking the property to Freelancer more overtly, were scrapped.