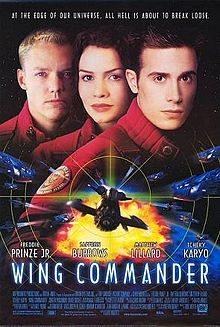 As part of the agreement between Electronic Arts and Chris Roberts, in regards to the departure of the latter from the former, he was given contractual permission to make a movie based on the Wing Commander franchise. In 1998, the result was released to the public by 20th Century Fox.
Advertisement:

New pilots Christopher Blair (Freddie Prinze Jr.) and his best friend/rival Todd "Maniac" Marshall (Matthew Lillard) are assigned to the TCS Tiger [sic] Claw as the Kilrathi fleet prepares to mount a massive assault on Sol Sector, using navigational information gained in a raid on a major Terran Confederation naval base. Time is short for Admiral Tolwyn (David Warner) to mount a defense, and the Tiger Claw is ordered to buy them more time. Whilst integrating with the Claw's flight wing, led by Jeannette "Angel" Devereaux (Saffron Burrows), Blair finds himself fighting some of the most crucial battles of the war—and trying to keep secret the fact that he's half "Pilgrim," a sub-species of humans subject to Fantastic Racism.

Tropes employed by the movie: