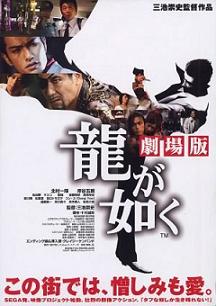 The legend of the Dragon of Dojima comes to the big screen.
Advertisement:

A Live-Action Adaptation of the first game in the video game brawler series for the PS2 and PS3, Like a Dragon (or Yakuza as it's formerly known in the West. The movie is sometimes referred to as Yakuza: Like A Dragon in western marketsnote Not to be confused with the seventh main-series game, which is titled Yakuza: Like a Dragon in western markets). It is an adaptation of the latter half of the first game in the series, featuring Kazuma Kiryu (桐生 一馬, Kiryū Kazuma), the "Dragon of Dojima," on his quest to find Haruka's mother, find out what happened to his childhood friend Nishiki and his girlfriend, Yumi while he was in prison for ten years (though you won't necessarily realize any of these things if you just watch the movie). There are several B-plots set in the city of Kamurocho, including the police dealing with a pair of idiotic bank robbers, a boyfriend and girlfriend going on a crime spree, and a Korean hitman arriving in the city.

Directed by Takashi Miike, written by Masashi Sogo and starring Kazuki Kitamura, the movie manages to capture the mildly surrealistic humor of the games, including the severe Mood Whiplash. It's stylized very much like a live action version of a video game, complete with rather cartoonish effects and ridiculous action sequences.

This film adaptation includes examples of: