Anime / Kabaneri of the Iron Fortress 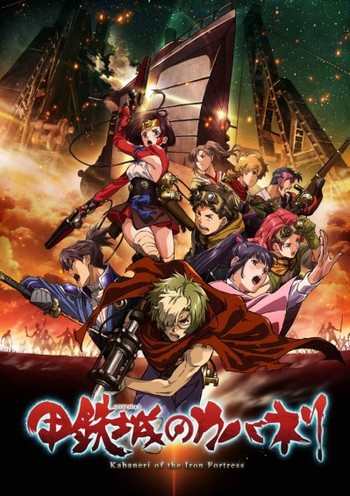 All aboard the badass Train!
Advertisement:

Kabaneri of the Iron Fortress (甲鉄城のカバネリ Kōtetsujō no Kabaneri) is an anime series produced by Wit Studio. The series is directed by Tetsurō Araki (Death Note, Highschool of the Dead, Guilty Crown, Attack on Titan) and written by Ichirō Ōkouchi (Berserk: The Golden Age Arc, Code Geass), with music by Hiroyuki Sawano (Mobile Suit Gundam Unicorn, Attack on Titan, Kill la Kill, Aldnoah.Zero) and original character designs by Haruhiko Mikimoto (Macross 7). The series debuted on Fuji TV's noitaminA block in April 2016. A prologue for the anime premiered for a week in theaters across Japan beginning on March 18.

For twenty years now, the island of Hinomoto has been ravaged by the Kabane - undead with bones of steel. These monsters reduced the once prosperous feudal nation into a wasteland, its last vestiges of civilization being walled station-cities. The only connections between the stations are giant armored trains known as Hayajiro. Every train trip may very well be the last, as even the slightest bite may inflict the "curse" of the Kabane, with the only way to avert the transformation being death. The struggle continues even if they arrive safely - attendants are checked over thoroughly for bite marks, and immediate executions on the spot if the "curse" is found are the norm. However, even life inside the stations is difficult, as the gulf between poor and rich is staggering, and the "bushi" caste rules over the common folk with an iron fist, using the fear of Kabane to control the population. Even then, more and more stations fall to the undead. It's a world ruled by despair and fear inside and outside the walls.

Ikoma, a mechanic working on board the Hayajiro, is determined to find new means to combat the Kabane, in spite of the fear-induced madness the populace has fallen into. He is working on a new weapon that can penetrate the iron bones of the Kabane and destroy their only weakness - their heart. His research also leads him to believe that only one bite from the Kabane is not a death sentence, which puts him at odds with the bushi. He will have to quickly put his findings into practice when a train crashes into his station-city engulfed in flames and Kabane. In order to save what few stations remain from the Kabane, Ikoma will have to master his new weapon, gather allies and, most importantly... survive.

Amazon Prime simulcasted the series worldwide as part of a deal with Fuji TV's Noitamina programming block. Crunchyroll acquired the home video license for the series (along with merchandising rights), and released it on Blu-ray and DVD with an English dub via their partnership with Funimation. Crunchyroll would later add the series to their service on November 1, 2019

A sequel film titled The Battle of Unato released on May 10, 2019 in Japanese cinemas. Netflix picked up the exclusive streaming rights for the film and released it worldwide on September 13, 2019.

Character tropes should go on Kabaneri of the Iron Fortress's Character page and tropes from specific episodes go on the Recap page.