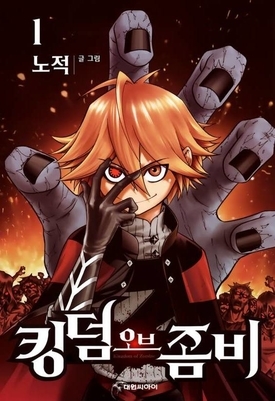 Kingdom of Zombie takes place in a medieval world in which the Zombie Plague has ravaged the land for twenty years. However, life goes on as most people live safely within walled-off cities and travel either in small groups that do not attract attention or via armored carts. Enter Van, a young boy who has to do menial chores for his adoptive father George. Angry with George, Van runs off to the outskirts of his home town, only to find the guards murdered and the gates being lifted, zombies already shambling their way in. It's then that an incredible power awakens within Van, and he manages to wipe out the small hoard single-handedly.

A new manga written and drawn by artist Nokeok. Kingdom of Zombie takes classic shounen tropes and encoroperates them with both a unique take on the Zombie Apocalypse and horror manga in general.

Kingdom of Zombie Includes examples of: