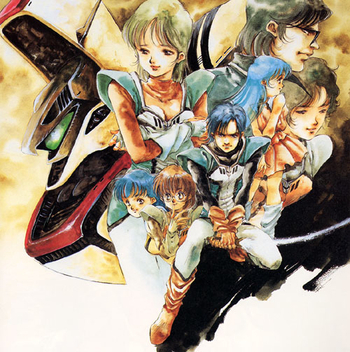 Where are you going, when are you coming home?
Advertisement:

Orguss is a 1983 anime series from Studio Nue (the creators of Macross), and TMS Entertainment (the studio that did Ulysses 31).

In the year 2065, the world's two superpowers are fighting over the control of a Space Elevator. Fighter pilot Kei Katsuragi and his friend Olson are assigned to just blow the damn thing up, providing escort for engineers using a new "dimensional" weapon of mass destruction - the Space/Time Oscillation Bomb. However, everything goes wrong when the engineers die before it can be set off. Kei is ordered to abandon and self-destruct the bomb, but instead chooses to start fiddling with it.

One flash of light later, Kei finds himself hurled into what he believes is another world... or is it? As it turns out, the world he ends up in is Earth; however, it is an Earth that is made up of many different dimensions... many alternate Earths squashed together - where dinosaurs evolved into a sentient species, where mankind was destroyed in a Robot War, where monarchies never fell, etc. When Kei started fiddling with the Space/Time Oscillation Bomb, he ended up turning the space-time of the entire planet into kudzu. A kudzu world with an expiration date, as the dimensional effect is maintaining itself at roughly a few miles above the planet's surface, and is trapping enough heat in the atmosphere that everyone will bake to death in a few more years. Kei ends up on the Emaan flying ship Glomar, joining its crew of gypsy-like traders on a quest across the planet and back to restore the pre-STOB world before all life is exterminated.

A six-episode sequel OVA, Orguss 02 done by JC Staff (of Slayers fame), was released in 1993. The story is set in a completely different world; at first, the only ties to the original series are the Orguss and Nikick mecha buried around the world, along with the ruins of the orbital elevator where everything started. The kingdoms of Rivilia and Zafrin have both learned how to rebuild the ruined "armors" (or "Decimators" in the English dub) using their World War II-level Schizo Tech, and the cold war between them is on the verge of igniting. But more of the original story resurfaces as young Rivilian mechanic Lean is sucked into the conflict between the nations, and meets Nataruma, an escaped Zafrin agent with strange powers, a chip on her shoulder, and an unusual heritage...

Orguss plays a big role in Super Robot Wars Z. Specifically, the Space-Time Oscillation Bomb Kei blew up at the beginning of the series was the catalyst for merging all the worlds and all the problems that came with it. 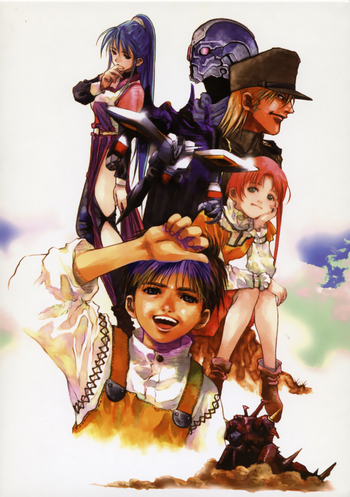 In the darkness, I had a dream / dreamed I saw the world's destiny.