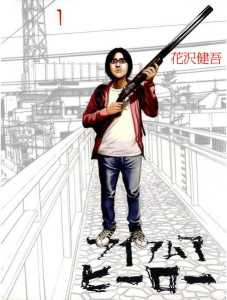 A 2009 comedy/horror manga by Kengo Hanazawa.

But there's considerably less-existential trouble brewing in the city streets. News reports have surfaced about a rash of biting assaults in crowded areas - here and there, someone seems to go berserk and sink teeth into the nearest bystander. Being around the same people every day, Suzuki's own risk for infection is low... but protagonism picks today to knock.

A uniquely weird Seinen series. Features realistic artwork that switches from funny faces to grotesque ones with outstanding impact.

A film version was released in 2016

I Am A Hero provides examples of the following tropes: