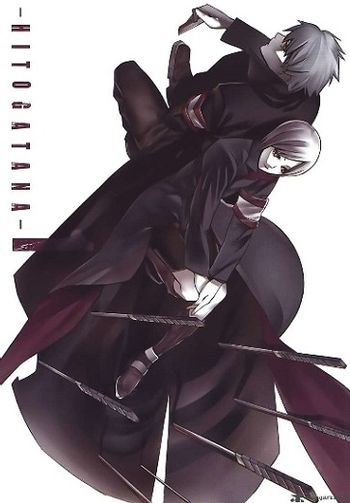 Hitigatana is an Action Genre Science Fiction Shounen manga by author and artist Onigunsou which began serialization October 10, 2009 in Comic Blade, and ended January 30, 2020. It is published in eleven volumes.

The story takes place 20 Minutes into the Future, where the invention of the miraculous technology to transfer a human soul into other objects in order to control something not of one's own body is the main factor for the rise of androids. Initially the main function of these androids were for industrial work and medical use. Over time a type that was equipped with weapons was manufactured specifically for combat use. These 'Armed Operational Androids' were called "Katana" and inscribed with the names of legendary katana's from Japanese history and folklore.

Crimes committed using "Katana" run rampant. In an effort to maintain order, the government has organized the AKCD - "Anti Katana Crime Division". The story follows Togusa, a member of the 8th squad of the AKCD who bridges the gap between human and machine and is constantly at war with those who misuse "Katana" and with his own inner demons and doubts.

The manga shares some similarities to Ghost in the Shell: Stand Alone Complex, and the works of Tsutomu Nihei, and has a very similar art style to Dogs: Bullets & Carnage.

This Work Has Examples Of: