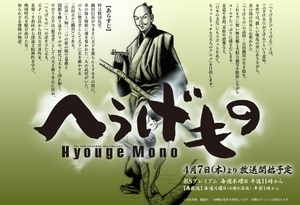 Hyouge Mono is one of the Spring 2011 anime series. Based on the manga by Yoshihiro Yamada, In the age of civil war, when the shadow of Nobunaga Oda was still cast over the land, the warlord Furuta Sasuke lost his soul to the tea ceremony. While war shook the world around him, he faced his own conflict between his desire for promotion and his love for his art.