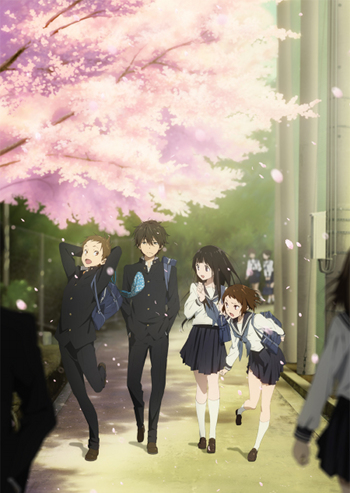 Hyouka (氷菓note "Ice Cream") is a mystery novel written by Honobu Yonezawa, serving as the first volume in a total of six in the Classic Literature Club (古典部 - Koten-bu) series. It was turned into an anime in the spring of 2012, produced by Kadokawa Shoten, animated by Kyoto Animation and directed by Yasuhiro Takemoto, with Shoji Gatoh serving as series composer, and Futoshi Nishiya serving as character designer; the series covered the first four volumes of the novel that had been published to that date. A manga counterpart was started in January 2012 in Monthly Shonen Ace.

The story follows a lackluster teenager by the name of Houtarou Oreki who, while cursing his first year of high school, lives by his motto "If I don't have to do it, I won't. If I have to do it, I'll make it quick". Nonetheless, things don't go as planned, as Oreki becomes involved with his high school's "Classics Club" at the behest of his elder sister. There, he meets Eru Chitanda, an apparently happy-go-lucky girl belonging to a very wealthy family who, besides having an extraordinary memory, possesses a level of curiosity far exceeding that of anyone Oreki has ever seen. Alongside the curious Chitanda, the chipper Satoshi, and the strict Ibara, Oreki will find himself pushed into using his untapped talent in solving various mysteries ranging in nature and scope throughout his foreseeable high school days.

After five years, the anime series was finally licensed for an English language release by FUNimation, who released the series in two parts as Blu-ray/DVD combo packs in July and September of 2017. The English dub is also available for viewing here

A live-action film based on the series, Hyouka: Forbidden Secrets, was released in 2017. It stars Kento Yamazaki as Oreki and Alice Hirose as Chitanda.

. This includes the yet-to-be adapted volumes It walks by past and Even though I'm told I now have wings.