Literature / The Daughter of Time 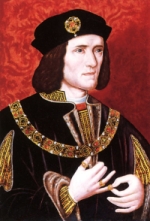 This being the face in question.
Truth is the daughter of time.
Advertisement:

This 1951 novel by Josephine Tey is one of the more unusual historical mysteries out there. Flat on his back in the hospital after falling through a trapdoor, Scotland Yard detective Alan Grant is bored. Really bored.

A kind friend, knowing Grant's ability to gauge someone's character by their face, sends him a pack of postcard portraits of famous historical figures. Most of them Grant pegs accurately enough, but he finds himself fascinated by one man, whose expression is sombre and reminds Grant of a judge. He flips the postcard over —

It's Richard III. Yes, that Richard III, Shakespeare's Richard III, Princes-in-the-Tower Richard III. Having identified one of English history's most notorious murderers as a judge is just embarrassing, so Grant promptly resolves to get at the truth behind the murders. Armed with historical romances, the sainted More and a fluffy American postgrad, he begins a crusade against people who didn't do their historical research.

Practically the bible of the Richard III Society.