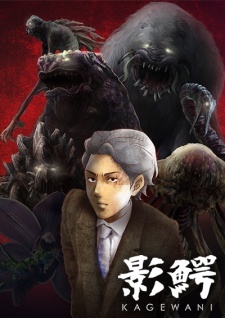 Professor Banba seems to be confident to stand in front of those UMAs.
Advertisement:

Kagewani (影鰐, which means Shadow Crocodile in English) is anime series that aired as part of the Fall 2015 Anime lineup on October 2, 2015 and in the Spring 2016 Anime lineup on April 1, 2016, which consists of anime shorts. It aired as part of the Ultra Super Anime Time block on Tokyo MX and BS11. Crunchyroll is exclusively airing it for English-speaking countries. The show is directed by Tomoyo Takashima with the scripts written by Hiromu Kumamoto.

The show takes place in the present day where cryptids, also known as Unidentified Mysterious Animals, have begun to attack — and sometimes kill — civilians for no discernible reason. Scientist and university professor Sousuke Banba investigates these mysterious attacks. This is usually a problem for him since it means ditching his university job to hunt down the cryptids and investigate what happened.